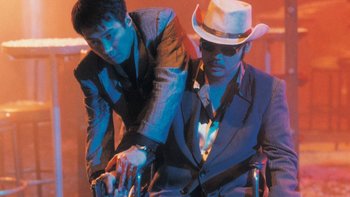 Jack and Martin tries to live up to the film's title. The keyword is "try".
Advertisement:

A Hero Never Dies is a 1998 Heroic Bloodshed film dirtected by Johnnie To, starring Leon Lai and Lau Ching-Wan.

Mobster Martin (Lau Ching-Wan) and top assassin Jack (Leon Lai) are on opposing sides of two triad families, but deeply respects each other for their respective ethics in brotherhood and skills as hitmen. But when their respective mob bosses decides to merge their syndicates together and get rid of both Jack and Martin, both men are betrayed and left for dead in South East Asia. They decide to join forces and find a way back to Hong Kong for revenge.