Hacked by a Pirate 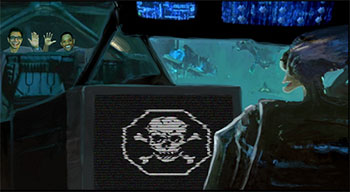 In case the alien might have trouble appreciating the symbolism of a human bone structure, they also packed a nuclear warhead.
"You should try uploading a virus to the mainframe. I find viruses that feature a laughing skull work the best."
— Dexter Grif, Red vs. Blue
Advertisement:

Whenever a character, be it the Asian and Nerdy hero or the computer genius villain, decides to hack into the opponent's computer and mess up with his plans, he'll never stop at just making the computer malfunction. You've got to do it with style.

And so, a Skull and Crossbones image shall take the entire screen of the hacked computer, possibly followed by the voice of the hacker laughing in the background. Alternatively, an 8-bit image of the character doing the hacking, or his logo, or perhaps a mix of the above, shall appear on the screen, such as a Skull and Crossbones, only the skull is wearing the very same hat the hacker wears. Reactions vary from confusion to aneurysms.

Named after the fact that Skull and Crossbones happen to be the Pirate's symbol of choice. Note that the trope is rarely, if ever, performed by an actual pirate, since they usually try not to be noticed.