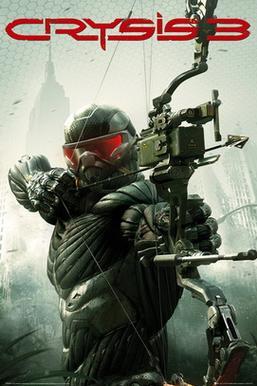 Welcome to the Jungle.
Crysis 3 is an FPS video game created by Crytek, and is the sequel to Crysis 2.
Advertisement:

The story, written by Steven Hall (best known for his novel The Raw Shark Texts), is set in 2047 and involves Prophet returning to New York to find that C.E.L.L. (the human antagonists from Crysis 2) have nearly taken over the world, the ruins of New York have become a literal urban jungle, and the Ceph are possibly on the verge of returning.

Crysis 3 is a return to form toward the original open ended gameplay style of Crysis after negative feedback over Crysis 2's more linear level design. It attempts to mix linearity and openness via linear sections that lead between large, open "arena" type areas.