Anime / Fusé: Memoirs of a Huntress 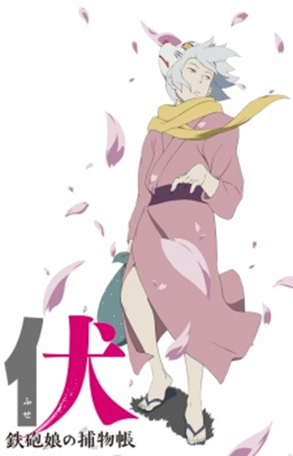 Fusé: Memoirs of a Huntress (Fuse Teppou Musume no Torimonochou) is a 2012 animated film directed by Masayuki Miyaji and produced by TMS Entertainment. The story centers around a hunter girl named Hamaji. Hamaji has spent her entire life in the mountains, living off the land. She receives a letter from her brother, asking her to go to Edo to join him. Arriving at the city, Hamaji is confused by the noise and crowds, and ends up lost. She bumps into a silver-haired young man engaged in a scuffle with local ruffians. After scattering the thugs (with the 'borrowed' help of her gun), the young man helps her find her brother's house by the river. Her older brother, Dousetsu, is a wannabe samurai with a plan. In Edo, there are 8 creatures known as fuse that are part-human and part-dog. The government is offering a substantial bounty for the head of a fuse; Dousetsu wants to take advantage of this to get rich and become an officer. So Hamaji and Dousetsu set out to hunt down a fuse in the bustling city of Edo.
Advertisement:

Fusé: Memoirs of a Huntress contains examples of: