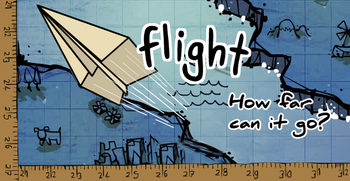 Flight is an Adobe Flash video game designed by Krin Juangbhanich released in 2010. In it, a girl named Sandy is lonely during Christmas, so she throws a paper plane with a letter for Santa saying she wants to see her mother. As one would expect, as the plane flies through the world, other people take it and change it as well. This is a standard launch game with the plane being thrown each day. The main source of money is stars, though there are other items that can affect flight, such as cranes, windmills, and jetstreams.