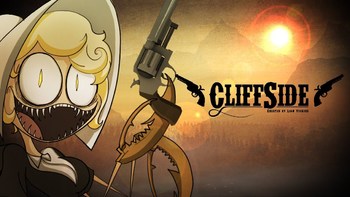 CliffSide is an animated pilot created by Liam Vickers. The story revolves about a boy named Waylon who strives to be a notorious outlaw. He is joined by his companion Jo, and befriends a spider girl named Cordie. Together they defend the ghost town of Cliffside from a myriad of supernatural entities.

The web animation can be found here