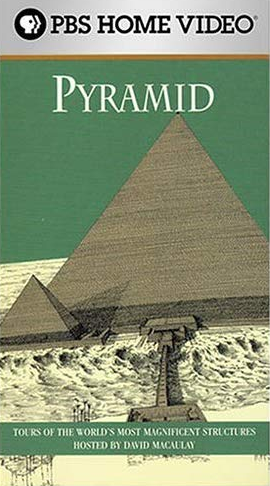 Pyramid is a 1988 PBS documentary with fully-animated docudrama sequences, adapted from the book of the same name by David Macaulay. It was produced by Unicorn Productions and presented by WHYY Philadelphia.

The film is essentially an animated dramatization of the construction of the real-life Great Pyramids of Giza for Pharaoh Khufu (voice of John Hurt). His son, Prince Hordedef (voice of Derek Jacobi), is honoured with the assignment of chronicling the construction of the pyramids as the royal scribe, and the pyramids are planned and constructed under the auspices of his half-brother, Grand Vizier Ankhaf (voice of BRIAN BLESSED). During the construction process, crisis strikes as the grand order of Egyptian religion, Maat, is threatened by grave robbers and a treacherous offspring (voice of Tim Pigott-Smith) of the Pharaoh. In the live-action wrap-around sequences, Macaulay explores the Great Pyramids of Giza and their surroundings and discusses the ancient Egyptians' obsession with death.

Not to be confused with the game show of the same name.

You can take these tropes with you: