Series / What Would You Do? (Nickelodeon) 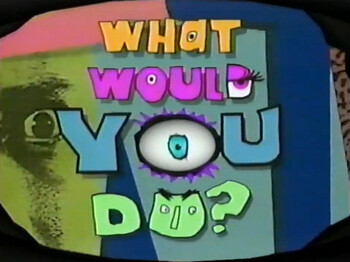 What Would You Do? was a children's game show hosted by Marc Summers that aired on Nickelodeon. It was created and executive produced by Woody Fraser in the wake of his success with another series he created and executive produced for Nickelodeon, Wild and Crazy Kids. The premise was similar to Candid Camera, as Marc would tape people in unusual situations and ask the audience (set around Universal Studios Florida, the network's original home in the 90s), "What would you do?" before the outcome was shown. Other aspects of the show involved members of the Studio Audience and Marc getting messy from some sort of contraptions, most of which involved pies.

The show went through a slight Retool between seasons:

Compare to Family Challenge, a later show from the same creator that aired on The Family Channel (now Freeform), hosted by Ray Combs and later Michael Burger, which played like a cross between Double Dare and WWYD?, including reusing many of the latter's trademark pie-in-the-face gags.

Not to be confused with the ABC show What Would You Do?, although both shows use hidden cameras as an element.