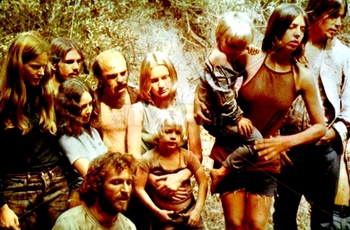 Manson is a 1973 documentary directed by Laurence Merrick and Robert Hendrickson.

No, it's not about the lead singer of Garbage, and no, it's not about Marilyn Manson either. It's a documentary about Charles Manson and one of the most infamous crimes in American history, the Tate-LaBianca murders of August 1969. Charlie Manson was a pimp and petty criminal who got out of California's Terminal Island prison in 1967 and found himself in San Francisco during the "summer of love." Within a short amount of time he had branded himself a religious guru and acquired a motley group of followers which he plied with drugs and sex and entertained with tales of a "Helter Skelter" race war which would end with Manson's "Family" ruling the world.

Merrick and Hendrickson did not interview anyone convicted in the Tate-LaBianca killings, although they did get ahold of an interview Charles Manson had with Jerry Rubin, which is included in the film. Nor did they interview the prosecution's star witness Linda Kasabian.note Kasabian never wrote any book and has spoken about the murders outside of courtrooms only three times: a 1988 TV interview, a 2008 TV documentary that featured her in voiceover, and a 2009 TV interview. People that they did manage to interview for the film include:

The interview segments are supplemented with stock footage and with quite a bit of footage of Family members at their hideout at the Spahn Movie Ranch, before the ranch burned to the ground in September 1970. Some stills from this documentary were used as illustrations in Vincent Bugliosi's bestselling book, Helter Skelter.