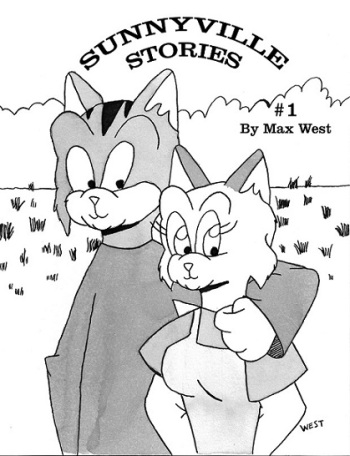 Sunnyville is a Slice of Life saga about an anthropomorphic cat named Robert "Rusty" Duncan who moves from a big city into a totally alien environment - a small, remote village. After exploring the woods, he runs across Samantha "Sam" Macgregor, another anthropomorphic cat and country girl. From there, the two embark on all kinds of day-to-day adventures.

The two stars of the series, Rusty and Sam, predate the series itself; they first appeared in a self-published zine by West titled Rusty & Sam #1 in 2009. After more work with world-building and trading in Sam's tiger-print pants for a dress, Sunnyville Stories launched in January 2010.

The comic also received a Spin-Off titled Dominic and Claire, starring Rusty's cousin Dominic. Both this and Sunnyville have also been confirmed to be part of the same universe as the picture book Hilda and Richie.

As of 2021, the series is on hiatus after 17 issues. The entire first episode

is free to read on the creator's blog.

Has a recap page currently under construction.