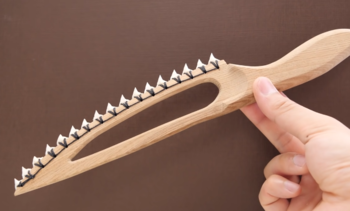 A knife made out of shark's teeth, because why not?
Advertisement:

A piece of equipment created from bits and pieces of a large creature. This can include teeth, claws, bones in general, hides and coats, whole appendages, chitin from Big Creepy-Crawlies, organs, and generally anything that can be cut off and utilized. The reasons for doing this can vary: it can be a matter of convenience, because the body part in question has properties not easily replicated by other means, or just a means of showing off.

Possession of such things tends to be shorthand for "badass hunter", since Fridge Logic dictates that the character most likely had to kill the creature in question to get the requisite materials. Claws and teeth also tend to be Absurdly Sharp Blades, to emphasize the ferocity of the previous owners, or at least justify their continued usage in place of more "advanced" weapons.

The creation of such equipment has become prominent in video games, as well, particularly the RPG genre. If the player isn't capable of crafting the gear themselves, it's not uncommon to find an NPC who can do the job in their stead... of course, they need 20 Bear Asses for materials.

Truth in Television: before metalworking, bones were a common choice for tool materials, and hides provide a lot of mileage in terms of insulation and warmth.

Since bones are a common choice for this trope, there's a lot of overlap with Bad with the Bone, Ballistic Bone or Skeletons in the Coat Closet. The runner-up, fur, generally leads to Pelts of the Barbarian, Fur Bikini, and/or Nemean Skinning. If the body is used as a weapon without it being taken apart first, that's Grievous Harm with a Body. If used ornamentally, it can also overlap with Battle Trophy. If animal parts are used for healing instead, that's Fantastic Medicinal Bodily Product. See also Item Crafting and Organ Drops.