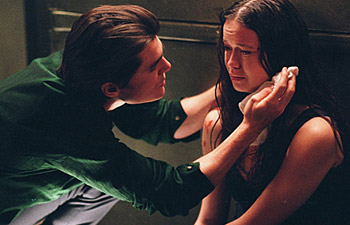 How do you protect someone from the voices in her head when they aren't hers?
"Some people will always need help. But that doesn't mean they are not worth helping."
— Meera Reed, Game of Thrones
Advertisement:

The Caretaker is a parent, spouse, sibling or child of a Cloudcuckoolander, Delicate and Sickly, Ophelia, or Squishy Wizard who takes care of them. They put their lives on hold to make sure their loved one is well taken care of and hopefully happy, often when the rest of the family actively passes the ball or abandons their relative entirely.

Most of the time they're defined more by their ward than as a character themselves. Since most stories center on their ill relative, they're often relegated to being the overprotective guardian who actively discourages their loved one from any and all self realization, love, and risky activity in general. And that's if they're attentive; a negligent or resentful Caretaker will put the Dursleys' cruelty to shame. Only rarely is there middle ground for a "dynamic" caretaker who encourages their ward while not completely losing the ability to have a life of their own.

What happens next is even more of a downer. Once their loved one is cured/finds true love/dies, (One of these three always happens, there is no Status Quo Is God where The Littlest Cancer Patient and his ilk are involved) they end up... stuck. They have no life to go back to, as care for their loved one was priority number one, and get stuck on what to do next with their lives. This often leads would be suitors or the loved one calling them out that they need their sick loved one more than the loved one needs them.

When the Caretaker is allowed to take center stage, they often have to deal with metric tons of Angst, both from love, resentment, frustration, sheer sadness, wishing their loved one were dead and guilt at the last four. Honestly, they rarely get the kudos they deserve.

Unless, of course, they become what might be called an "activist" caretaker, in which case they not only care for their relative, they practically quest for a cure or better treatment on the part of society. Activists usually manage a happier ending, either partially or fully healing their ward, carving out a niche for them in society, rehabilitating them, or at least helping others do the above.

Not to be confused with Crusty Caretaker. Or caretakers in general, if you're British. See also Living Emotional Crutch. Has strong overlap with The Champion, indeed is likely to be the same person. The Cloudcuckoolander's Minder is more "babysitting a weirdo" than "caring for an invalid" and thus more comical, though they could overlap, if the invalid in question is well....weird. Compare Protectorate. If the relationship between caretaker and charge becomes romantic, see Florence Nightingale Effect.

Not to Be Confused with the musician The Caretaker, or the eponymous entity from the pilot episode of Star Trek: Voyager.