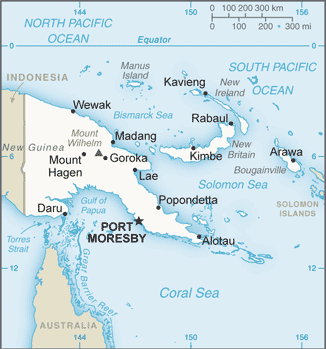 The Independent State of Papua New Guinea (Tok Pisin: Independen Stet bilong Papua Niugini, Hiri Motu: Independen Stet bilong Papua Niu Gini, PNG) is the third most known country in Oceania, after Australia and New Zealand. Both PNG and New Zealand is nicknamed as the Island of the Birds due to the sheer diversity of avian wildlife and it also shares the unique position alongside the Philippines and South America where a bird is the uncontested apex predator. Speaking of birds, it is best known for its beautiful Birds-of-Paradise, but it is also known as Cassowary Land due to the fact that it house not only the largest population of Cassowaries, but all three subspecies of the bird. It is also the second biggest by population, with about 7 million people. The country itself is the eastern part of the island of New Guinea, the western part belongs to Indonesia.

The New Guinea island has been settled since about 42,000 years ago. The people here, popularly called the Melanesians, are closely related to the Torres Strait Islanders who live in Torres Strait Islands that separate New Guinea from Australia. Despite their "African-like" looks, the Melanesians are actually less related to Africans than the Europeans, Asians, and indigenous Americans. The reason usually posited is because the Melanesians are the remnant of one of the earliest expansions of humans from Africa, i.e. those who didn't get assimilated by later migrants. But then, they are still babies compared to the Aboriginal Australians, who are the most divergent of the entire Homo sapiens sapiens species, having diverged from the Africans since 70,000 years ago.

Before the 1950s, the zone was known for headhunting and cannibalism. Needless to say, you don’t get to see much of it today. The common stereotype now is that the entire country is infested with anthropologists doing ethnographic studies.

During World War I it was taken by Australia (from Germany). In the sequel it was a major battleground between Australian, American and Japanese troops, particularly the gruelling Battle of the Kokoda Track. At the end of the war, north and south were united in a single country (until then were administered separately) administrated by Australia. They declared independence in 1975, though they, like Australia and New Zealand, are still part of the Commonwealth Realm (that means still recognizing the British monarch, currently Charles III, as the head of state).

The country is mostly rural and much unexplored, geographically and culturally, at the point that a lot of people think the country can be a surprise box of wildlife. Its largest river by discharge, the Fly River,note 20th in the world among primary rivers—those that don't flow into another river. Putting it in a global perspective, it's virtually the same size as the Columbia, about 15% larger than the Danube, and more than twice as large as either the Rhine or the Nile. is most notable as the largest river in the world with no dam whatsoever in its watershed.note While several rivers that are larger and/or longer are undammed, at least one river in those watersheds has been dammed. Yes, even the Amazon, which itself has no dam, has dams in its watershed.

Despite the fact the country is so close to the equator, it actually snows in there. This snow, however, is limited to the peaks of the mountain ranges, and, due to the recent global warming, may disappear in the coming decades.

The official as well as unifying languages of the country are English, Tok Pisin, Hiri Motu, and Papua New Guinean Sign Language. Though most of the population more or less understand the first three (Tok Pisin especially), that doesn't hide the fact that the country is incredibly diverse linguistically as well as culturally. There are 850 spoken languages in a country the size of California and the population of Michigan (disregarding actual language spread, that means that you can find one distinct language for every 8,000 people). Most of them are isolates from each other, too; the term Papuan is really just a placeholder to designate the languages of the entire New Guinea and its surrounding islands.

The population nowadays is almost entirely Christian, but there are also animistic religions. Formerly used seashells as currency, something that can be quite weird to the rest of the world (you can still bribe someone with seashells, though).