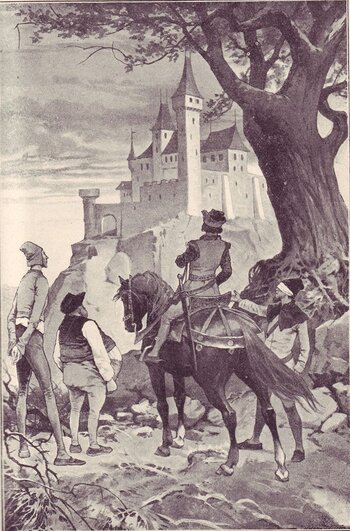 The prince arriving at the castle.
Advertisement:

The Six Servants is a traditional German Fairy Tale, collected by The Brothers Grimm, about a prince who has to perform certain Impossible Tasks for a monarch but is aided by six exceptionally gifted men whom he encountered while travelling. They are:

A king or queen orders the prince to perform three impossible tasks to win the hand of the princess. So far nobody was able to complete them before the deadline. The first task is bringing back a ring that the queen dropped in a river. The long necked servant sees the ring, the obese servant drinks the entire river dry whereupon the fast servant gets the ring and brings it back to the palace. In some adaptations he falls asleep during this assignment while the others nervously wait for him. The long necked servant stretches his neck and sees him, whereupon the servant with the bulletlike eyes shoots a fly sitting on a branch of the tree against which the fast servant is sleeping. This wakes him up and he dashes off back to the palace.

The second task involves eating 300 oxen and drinking 300 barrels of wine. The prince is allowed to bring one servant with him and of course he brings the obese one with him. The third task is spending the night with the princess without falling asleep. In the middle of the night the queen will check whether she is still lying in his arms. If not, then he loses. Despite their precautions the prince does fall asleep (in some versions because the queen cast a magic spell upon him and his servants) and the princess is abducted and brought to a faraway hiding place. Eventually the prince and his servants do wake up. The long necked servant quickly discovers where the princess is kept. The fast servant and the one of with the bullet eyes rush to the location, where the bulleteyed servant destroys a rock behind which the princess is hidden. They bring her back just in time before the queen comes to check out whether the princess is still in the prince's arms.

When the queen discovers what happened she orders 300 trucks of wood to be lit in flames. Only when somebody is able to sit in the fire the princess will marry the prince. Thus the cold blooded servant steps forward and manages to freezes the flames out, still feeling chilly in the process. The marriage is settled, but the evil queen still sends her troops after them. Luckily the big eared servant hears this. The obese servant blows wind thru one of his nostrils (or spits out a large flood of sea water), thus beating the soldiers. The bullet eyed one also kills many of them. And with that all ends happily ever after.

The tale shares some parallels with other stories. Another Grimm fairy tale, How The Six Made Their Way In The World ("Sechse kommen durch die ganze Welt") has a similar plot. A few scenes of the novel The Adventures Of Baron Munchausen also have similar characters serving the baron. In the Netherlands the story is especially well known because the theme park "De Efteling" uses the character with the long neck as one of its mascots.

This fairy tale provides examples of: