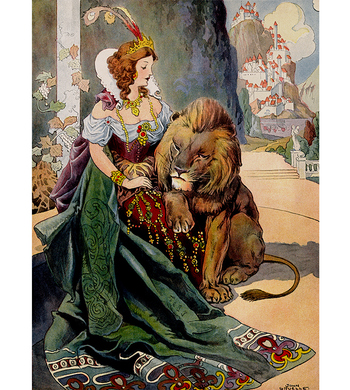 The Singing, Springing Lark (alternatively called The Singing, Soaring Lark, Lily and the Lion, or The Lady and the Lion and known as Das singende springende Löweneckerchen in the original German) is the eighty-eighth Fairy Tale in The Brothers Grimm's anthology of German folklore, Children's and Household Tales. It is a Beauty and the Beast-type story, or ATU 425C in the Aarne-Thompson-Uther Index.

Once upon a time, a merchant prepares to go on a journey. His two elder daughters request expensive treasures, but the youngest asks for a lark. The father manages to procure the diamonds and pearls, but has no luck with the bird. On the way home, he spots the bird in a tree and orders his servant to catch it.

At that moment, a lion springs out, angry at the men for trying to steal his lark. The merchant offers to trade the bird for something of equal value. The lion sets the price: “what first meets thee on thy return home”. The merchant is hesitant, fearing that the lion is making him trade his youngest daughter, but the servant persuades him that it could just as easily mean the cat or dog, and he accepts the lion’s terms.

Sure enough, the youngest daughter is the first to greet her father. She accepts her fate and fearlessly walks to the lion’s castle in the forest. Expecting to be eaten, she is pleasantly surprised to learn that the lion is actually an enchanted prince: by day, he and everyone in his castle live as lions, but after sunset, they turn back into humans. The heroine and the lion prince fall in love, get married, and even have a baby, living happily in spite of the enchantment.

Then the heroine gets a letter from her oldest sister, who is getting married soon. Accompanied by the lion pride, the heroine visits her family again, who are happy she is alive and doing well for herself in the woods. When the second sister’s wedding approaches, the heroine insists on brining her lion-husband to the party, but he is hesitant: as part of his enchantment, if the light of a candle ever shines on him, he will turn into a dove and fly around the world for seven years. The couple comes up with a plan to keep him in a wooden chamber that will shield him from candle-light at the wedding. But the tiniest ray of light slips through a little crack in the chamber, and off he flies. Every seven steps, the dove-prince lets fall a drop of blood and a white feather so that his wife can follow him.

Nearly seven years later, the heroine loses the trail. Knowing that no human could possibly help her, she talks to the sun to ask it if it has seen her dove-husband. The sun answers no, but gives her a casket that she can use in her hour of need. She tries again with the moon, who hasn’t seen the dove but offers her an egg to open in her our of need. Then she talks to the North, East, West, and South Winds, and the South Wind finally gives her an answer: the seven years are up, and her dove-husband is a lion again. He is at the Red Sea, fighting an enchanted princess-turned-dragon. They give her some advice on how to disenchant both beasts, directions to a griffin that can carry her and her prince home, and a magical nut that will grow into a tree and give the griffin a place to rest so it won't drop them into the sea halfway there.

The heroine goes to the Red Sea and follows the Winds’ instructions to the letter. She counts eleven reeds, uproots the eleventh, and strikes the dragon with it. This gives the lion-prince the opening he needs to defeat the dragon, and they both turn back into humans. However, before the heroine can reunite with her husband, the dragon-turned-princess grabs him by the arm and flies off with him on the griffin to be her husband.

After a moment of crying, the heroine gathers her courage and travels to the kidnapper’s kingdom as they ready for the wedding feast. She opens the sun’s casket and finds a dress a radiant as the run. The bride is so amazed by the gown that she asks the heroine if she would be willing to trade for it. She sets the price: “Let me sleep a night in the chamber where the bridegroom sleeps”. The princess reluctantly agrees, but has her servants give the prince a sleeping potion so he cannot hear his wife’s pleas, but he does pick up on a mysterious murmuring sound.

She tries again the next day with the moon’s egg, which hatches into a beautiful golden hen with twelve chicks. The princess agrees to the trade, fully intending the cheat her again, but the prince, curious about the strange sound from last night, ignores the sleeping draught.

When his wife walks in he recognizes her immediately and cries, “Now I really am released! I have been as it were in a dream, for the strange princess has bewitched me so that I have been compelled to forget thee, but God has delivered me from the spell at the right time.” Husband and wife sneak out of the castle to avoid the bride and her wizard father, and ride on the griffin across the Red Sea (deploying the Winds’ nut midway so the creature can get some rest). They arrive home, find reunite with their families including their child, and live happily ever after.

; Margaret Hunt's (which calls it "The Singing, Soaring Lark) can be found here

; Edgar Taylor's version ("The Lady and the Lion") can be found here

; and Marian Edwardes' version ("Lily and the Lion") can be found here