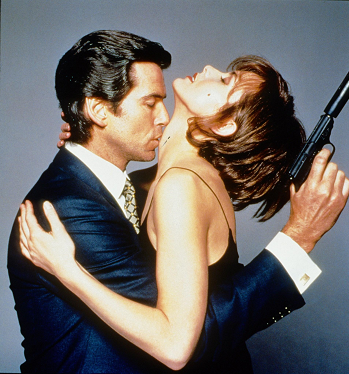 "Oh, James!"
I have my way with women! After I'm done, I skip town! As I get old, I'm thinking... do guys like me settle down?
— Goldentusk, James Bond Theme Song

The life of a spy can be quite a romanticized profession in fiction. Nice suits, slick cars, neat guns, and one stylish adventure after another. But how would any of that be complete without a pretty lady by your side? Maybe this particular girl is in league with the Big Bad and the agent must woo information out of her. If she isn't another fellow agent trying to complete the mission alongside the hero as she's subject to the whims of his seductive tendencies, she could be an innocent bystander caught up in the danger and must be soothed by the dashing agent's masculine charms. Regardless, the secret agent will flaunt his womanizing to the audience and the woman will probably never be heard from again to make room for the next Girl of the Week.

Mocking parodies will portray the spy as a pathetic Casanova Wannabe or a predatory rapist at worst.

A Sub-Trope of The Casanova. The Femme Fatale Spy may serve as an example of a gender-inversion of this trope.

Not only is Secret Agent Brock Mason successful with so many women (which includes the titular villain's wife), but he also apparently has no qualms about hitting on teenage girls! Yechhh!

Not only is Secret Agent Brock Mason successful with so many women (which includes the titular villain's wife), but he also apparently has no qualms about hitting on teenage girls! Yechhh!