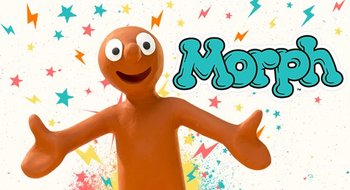 Morph is a series of British Claymation shorts produced by Aardman Animations about the everyday happenings of a plasticine man who lives on the desk of an artist. Throughout many shorts, Morph would often change shape to form other objects, hence his name, and he would speak pure gobbledygook. Morph also has a friend called Chas, who is more badly behaved than him, and a "dog" named Nailbrush. The Amazing Adventures of Morph added more characters, including GrandMorph, Gillespie, Folly, Delilah, and Gobbledegook; aside from appearing in stock footage in The Morph Files, none of these characters have appeared in the more-recent shorts, at least until GrandMorph and Delilah were reintroduced in 2020.
Advertisement:

Ever since his first appearance on the art programme Take Hart in 1977, Morph has remained to be popular in the United Kingdom, spawning many shows about the character. These include The Amazing Adventures of Morph, The Morph Files and, in recent years, just Morph; in 2020, a new series called The Epic Adventures of Morph debuted.

Each short would provide examples of: