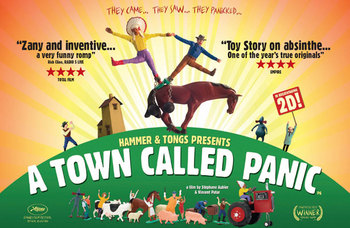 A Town Called Panic (Panique au Village) is a Belgium made, stop-motion animated tv series and film, produced La Parti & Pic Pic André. The series and film is notable for its distinctive style - the characters are all tiny plastic figurines, like the kind you'd get in your granddad's toy box - and the hectic, erratic movements of everyone in the show. Aardman Animations produces an equally irreverent English dub of the series.

A Town Called Panic centers around three inhabitants of the tiny town of Panic: Cowboy, Indian and Horse. They are an actual Cowboy, Indian and Horse. Cowboy and Indian are childish, dimwitted and perpetually fighting amongst themselves, whilst Horse is a marginally more adult father figure to the others. Throughout the course of the series, they generally quarrel amongst themselves, cause trouble for the locals, and get into highly surreal situations.

The 2009 film begins with Cowboy and Indian trying to build a barbeque for Horse's birthday. Due to a typo, they accidentally order 50 million more bricks than they actually need. To hide their mistake from Horse, they stow the excess bricks on the roof, which causes the house to collapse. Horse, who has become smitten with a lovely mare music teacher, is tasked with rebuilding the house - an effort made harder by a family of Jerkass underwater creatures in frog suits who keep stealing everything. Much Hilarity Ensues, along with kung-fu fighting scientists, giant snowball tossing robots, and the world's loudest farmer.