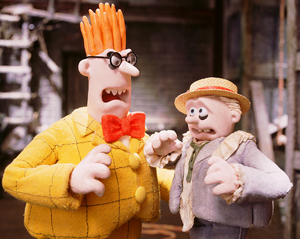 Stage Fright is a 1997 BAFTA-winning animated short by Aardman Animations. It was written and directed by Steve Box, who animated on A Close Shave and, later, co-directed The Curse of the Were-Rabbit.

The film tells the story of Tiny, a music hall has-been whose dog-juggling act is upstaged by the blooming medium of motion pictures. His friend Daphne stars in many of these films as the love interest to the character "Lonesome Arnold," whose actor, Mr. Hugh, is a brute once the cameras stop running. As Daphne's career prospers and Tiny's career disappears, Hugh exploits both of them by getting Tiny to train the dogs for his films, mostly so Daphne will keep acting in them.

Not to be confused with Alfred Hitchcock's 1950 crime thriller, or the 2014 slasher musical.

Tropes appearing in Stage Fright include: