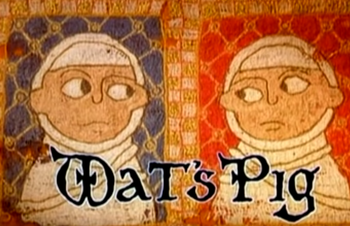 The princes on the title card.
"Wat’s Pig" is a 1996 short created by Aardman Animations and written and directed by co-founder Peter Lord. It is a tale of two princes who are split as babies only to reunite as adults during a war. It is told almost entirely non-verbally.

Tropes in the short include: