Literature / Back in the USSA 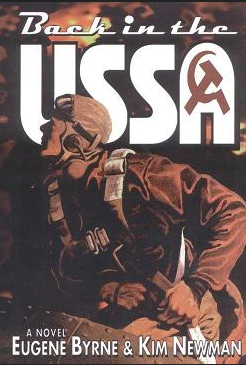 Back in the USSA is a collection of short stories by Eugene Byrne and Kim Newman, published in 1997.
Advertisement:

The stories are set in an Alternate History in which the United States has a communist revolution led by prominent Real Life American Socialist Eugene Debsnote The real life Debs hated Stalinism and the Soviet Union that this series is based on in 1917, with subsequent events parallelling the real-life history of the USSR. (Russia, in this history, remains an empire but evolves into a constitutional monarchy, and allies with the UK against the USSA in the Cold War.) They feature Newman's trademark Massive Multiplayer Crossover style, with fictional characters rubbing shoulders with historical figures in surprising new contexts.

"On the Road" is original to the collection; the other stories had previously been published in Interzone. "Teddy Bears' Picnic" was also reprinted in Newman's collection Unforgivable Stories.