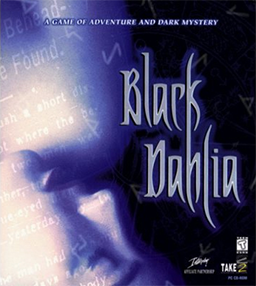 Black Dahlia is an Adventure Game released by Take 2 in 1998. The story begins in Cleveland in 1941, where a brutal serial-killer known as "The Torso Killer" terrorises the population. The main character of the game, Jim Pearson has recently been assigned to the COI - "Co-ordinator Of Information"- unit. Jim's first mission is to investigate a complaint from a businessman who claims that one of his former employees left subversive propaganda at his factory. During the investigation Jim learns about The Black Dahlia; a mysterious artifact that according to legend will grant whoever possesses it the power to rule the world. It soon becomes evident that The Dahlia is somehow linked to "The Torso Killer".

Black Dahlia is easily, in terms of scope, one of the greatest adventure games ever made; featuring a huge cast of characters and a complex, epic plot that spans over several years. A comparatively more believable storyline than Ripper, Take 2's other noted Full Motion Video Adventure Game, although it doesn't boast as illustrious a cast list, with "just" Dennis Hopper and Close Encounters of the Third Kind's Teri Garr.

This game should not be confused with the novel by James Ellroy, or with the latter's film adaptation. It is also not related to the 1946 Film Noir The Blue Dahlia.

The Game provides examples of: