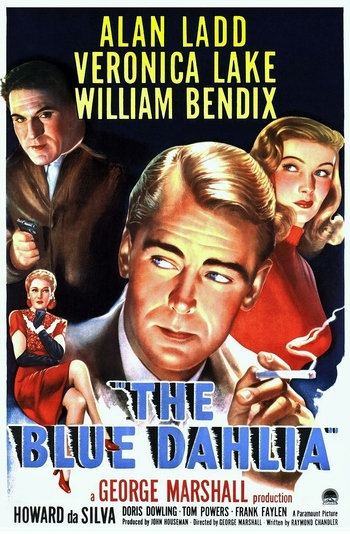 The Blue Dahlia is a 1946 Film Noir, directed by George Marshall and written by Raymond Chandler, about a Navy officer who returns home to an unfaithful wife, who is later murdered. It stars Alan Ladd as the Navy officer, Johnny Morrison, and Veronica Lake as his Love Interest, Joyce Harwood, the wife of a mobster who is seeing Morrison's unfaithful wife, Helen (Doris Dowling). During the movie Johnny tries to solve the mystery of the murder of his wife while the police are looking for him as prime suspect.

William Bendix plays Buzz Wanchek, Johnny's Navy buddy. George, Johnny's other war buddy, is played by Hugh Beaumont, who a decade after this movie played his most famous role as Ward Cleaver on Leave It to Beaver.