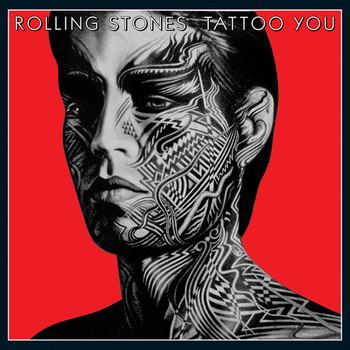 "If you start me up, I'll never stop!"
Advertisement:

Tattoo You is the sixteenth studio album (eighteenth American album) by The Rolling Stones, released in 1981. Curiously for such a successful and popular record, it was largely a happy accident; the Stones had planned a large-scale American tour for the summer of 1981, to be followed by a European leg the next year. Tattoo You was assembled largely from discarded songs and old out-takes so the band would have a product for the tour to promote.

It is most famous for the classic hit "Start Me Up" (which has its roots as a reggae song called "Never Stop", written during the Some Girls sessions). It is also their last studio album to reach #1 on the US charts.

Waiting on a Trope: