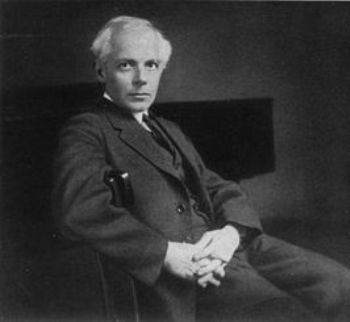 Béla Viktor János Bartók (25 March 1881 – 26 September 1945) was a Hungarian composer, widely regarded as one of the most important musicians of the 20th century. He is widely renowned for his interest in traditional peasant's music, which he collected together with his composer friend Zoltán Kodály, while traveling in Eastern Europe and North Africa. Bartók was enarmored by the authenticity and originality of this music. While other Eastern European composers such as Fryderyk Chopin, Franz Liszt and Antonín Dvořák had also used influences of traditional Folk Music in their work Bartók was the first to keep the primitive rawness of peasant music intact. As a result his music sometimes sounds clangorous, but there are also moments that are so moving that it makes you cry.

Although he was initially a traditionalist and nationalist (his earliest works, such as the symphonic poem Kossuth, show strong Lisztian influence), this changed once he discovered traditional Hungarian folk music. Bartók recorded all traditional peasant songs he could find in Hungary and elsewhere, both for folklorist purposes and to use as inspiration for his own Avant-Garde Music compositions. Some motifs and melodies in his work are recognizable peasant tunes, but other passages are his own material. He also quickly discovered that there was significant similarity between Hungarian folk music and that of other cultures, such as those of Romania and Morocco.

His most famous works are Mikrokosmos, Romanian Dances, Dance Suite, his three Piano Concertos, Music For Strings Percussion And Celesta, and the Concerto for Orchestra.