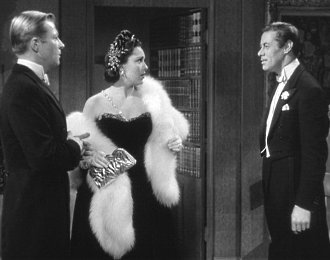 Unfaithfully Yours is a 1948 film from 20th Century Fox, written and directed by Preston Sturges, and starring Rex Harrison and Linda Darnell.

Renowned conductor Sir Alfred De Carter (Harrison) has been Happily Married to his wife Daphne (Darnell) for a number of years. But when he arrives home from a trip, he receives distressing news. It seems his brother-in-law (Rudy Vallee) misunderstood when Alfred asked him to "keep an eye on" Daphne, and hired a private detective to follow her. Then it turned out the detective actually did find evidence that Daphne might be having an affair, due to seeing her enter and leave the room of Anthony Windborn (Kurt Krueger), Alfred's secretary.

Distressed over this apparent betrayal, Alfred has differing fantasies over what to do as he conducts a concert, each fueled by the three extremely different musical pieces, which he conducts during the performance. The first fantasy is about murdering Daphne and framing Windborn for the crime, played to Rossini's Semiramide overture. The second is about forgiving Daphne and letting her be with Windborn, to the overture to Wagner's Tannhäuser. The third is about confronting them over their affair, to Tchaikovsky's Romeo and Juliet-fantasy overture.

And then he tries implementing these fantasies for real.

This film could have been many things with its premise, but it's actually a dark comedy about how Alfred deals with his feelings. This is suspected to be reason it didn't do well at first, but grew in reputation with audiences used to such subject matter.

Another possible reason the film did not do well was the suicide of Carole Landis, a film actress and lover of Rex Harrison. Landis took a fatal overdose of sleeping pills after Harrison refused to leave his wife for her. Unfaithfully Yours—a comedy in which Harrison plays a man who imagines murdering his wife—came out only four months after Landis's suicide and the ensuing scandal.

A remake was produced in 1984, starring Dudley Moore and Nastassja Kinski.