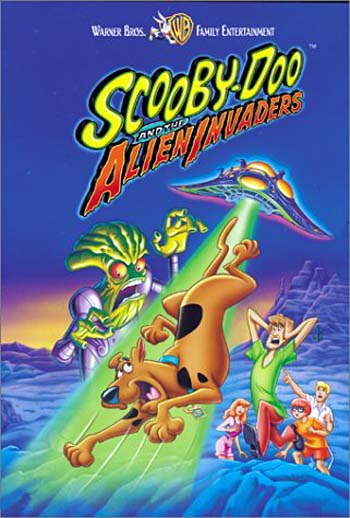 Directed by Jim Stenstrum, Scooby-Doo and the Alien Invaders is the third direct-to-video installment for the Scooby-Doo franchise, produced by Warner Bros. Animation with a Hanna-Barbera Cartoons, Inc. copyright. Like the two films before it, Mook DLE did the animation.

Unlike the previous films, in spite of the grimmer atmosphere, it also had a lighter tone.

The gang is driving through the Sonoran Desert when Shaggy sees a UFO, and in the ensuing chaos the Mystery Machine breaks down. After Scooby and Shaggy are chased into a nearby town by a pair of aliens, the gang is forced to take refuge overnight until the Mystery Machine can be repaired. In town, the gang finds a variety of colorful characters, some eccentric, some friendly, and some who may be something more. But it all comes back to the mystery revolving around the strange series of seemingly extraterrestrial threats plaguing the town - will the gang be able to uncover the mystery before they too end up as the aliens’ next victims?

Notable for being the last Scooby-Doo film to be animated with cels, as the next film and onward would be animated digitally.