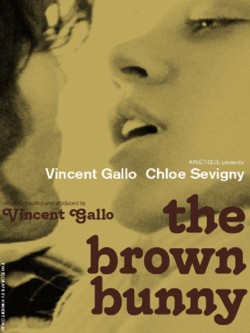 The plot follows Bud Clay, a motorcycle racer, undertakes a cross country drive, following a race in New Hampshire, in order to participate in a race in California. All the while, he is haunted by memories of his former lover, Daisy. On his journey he meets other women, but is unable to form an emotional connection with any of them.

The film is noteworthy for the amount of controversy around it. First shown at the Cannes Film Festival, the film was booed, and many walked out on it. The film was also greatly panned by critics, with director Gallo getting into an awesome war of words, with critic Roger Ebert, and eventually losing. The film was later Re-Cut and distributed. The finished product received mixed reviews, though ironically, Ebert gave this version a much more positive rating of 3 out of 4 stars.

At the same time, however, he still upheld his claim that the original cut was the worst thing he'd seen at Cannes.