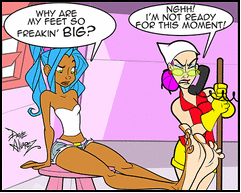 In many works of fiction, a character will be ashamed or made fun of the size of their feet. If the character is female, then their feet will usually be larger compared to their peers, as large feet are considered unfeminine. If the character is male, then their feet will usually be on the smaller side, due to the stereotype about men with big feet. Said characters will often be on the receiving end taunts and jeers from those around them, but they'll ultimately learn to accept their size by the end of the story, and maybe even find an asset in their feet.