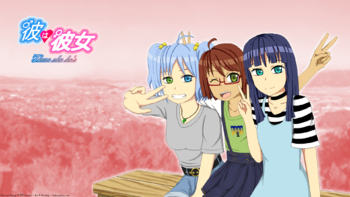 Kare wa Kanojo, or There she he's, is a free, independent visual novel about a boy who has recently moved to a village, his escapades with the three girls he meets, one of whom holds a deep secret about herself...
Advertisement:

The game was released in 2012, eventually seeing a major overhaul in 2018 with all-new HD art, new routes, and even a new character, Nanami.