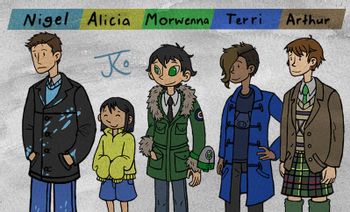 One of these things is not like the other... And it ain't the little girl.
"Has anyone ever told you that you're kinda weird?"
— Nigel (to Morwenna)
Advertisement:

Warning: due to the nature of Handling Spoilers, all spoiler-inducing tropes are unmarked. Read at your own risk.

Three Guys That Paint is a Slice of Life Visual Novel (by Katy133) about Nigel (a housepainter), Alicia, (a little girl he's taking care of), and his co-workers painting a wall for a shopping mall in London, Canada, where Nothing Exciting Ever Happens.

Then Nigel decides to accept Morwenna (a strange woman with an odd wrist device) as a tenant.

Of course, weirdness ensures. And how.

Three Guys That Paint can be found on Lemmasoft.

There is also now a game supplement that is set in the same Universe and takes place after the events of Three Guys That Paint): An Interactive Fiction game (complete with Text Parser) called A Tune at the End of the World, which can be played online.