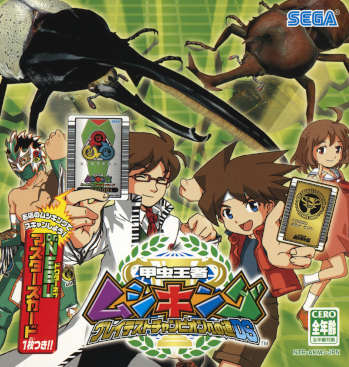 Mushiking: The King of Beetles (甲虫王者ムシキング Kōchū Ōja Mushiking) is a Collectible Card Game developed by Sega and released in Japan and other Asian countries such as the Philippines. The game involves battles between cards describing various beetle species, where the cards can be scanned in by an arcade machine, which will both carry out battles and dispense new cards.
Advertisement:

The story takes place in a forest full of trees inhabited by insects and fairies. A fairy, named Popo, was a friend of the insects of the forest. He is a friend to a particular Japanese beetle called "Mushiking". One day, giant beetles from parts unknown arrived in the forest to wreak havoc, under the control of Adder, a wizard exiled from the forest who wishes to conquer it. Popo enlists the player's help to fight against Adder.