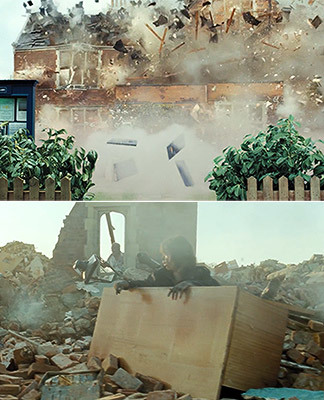 The rule of Improbable Cover states: Explosions in movies can't see you if you sidestep behind a wall or jump behind a table.

Of course, as the Mythbusters showed, this can be Truth in Television. The shockwave produced by explosions is one of their most dangerous elements as it can cause significant internal damage. Even a flimsy barrier can potentially blunt the shockwave's power enough to avoid outright fatal injuries. At the same time there is no guarantee that the barrier will do enough or prevent death due to flames and shrapnel.