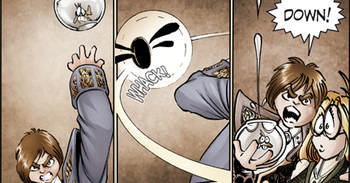 This is an action trope. It is performed by a character who throws an object in the air, performs some action sequence while it is airborne, then catches it on its way down. It pays off if the object in question is cumbersome and makes desired action impossible but it can be used in other situations too.

The velocity with which it would need to be launched tends to make this implausible in Real Life.