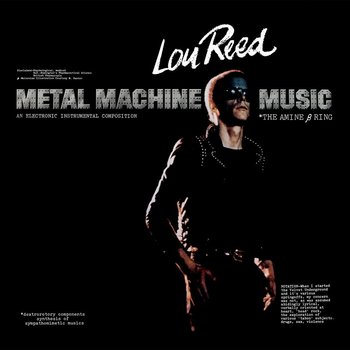 "One record for us and it."
"Most of you won't like this, and I don't blame you at all. It's not meant for you."
—Liner notes for Metal Machine Music.
Advertisement:

, better known as simply Metal Machine Music, is the fifth studio album by Lou Reed, released in 1975. Released on the heels of the slick, popular Sally Can't Dance, the album is a sharp left turn in style, instead being two LPs of modulated guitar feedback without any structure or form beyond variances in the audio's mixing speed. Intentionally designed to be as impenetrable as possible, Reed described the album as the culmination of Heavy Metal, which he claimed to invent.

Reed wouldn't revisit the style again in the studio, returning to his signature brand of art rock on later albums. He would, however, return to experimental work near the end of his career, with the ambient album Hudson River Wind Meditations in 2003 and his Metallica collaboration Lulu in 2011.

In the years since its release, Metal Machine Music has been described as a progenitor to the genres of industrial, noise rock, and drone. In 2002, Reed performed the album live in collaboration with the avant-garde classical ensemble Zeitkratzer and formed a band named the Metal Machine Trio as a Noise Rock project.

CD releases are on a single disc