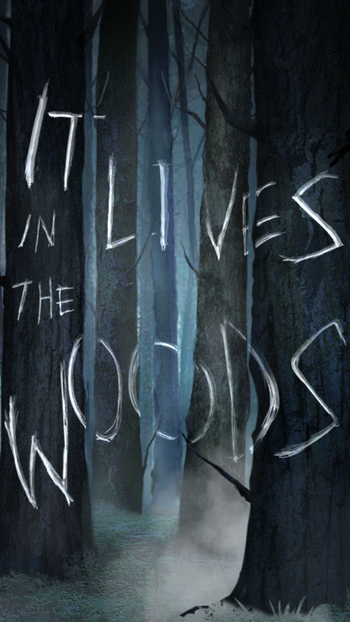 Everyone plays together.
Advertisement:

It Lives is a series of Visual Novel horror stories. The series is a part of the larger collection of games within Pixelberry’s Choices: Stories You Play.

In It Lives In The Woods, released October 2017-January 2018, you are an Ordinary High-School Student named Devon (though you can choose both your name and gender), living in the quiet Oregon suburb of Westchester. You and a group of your old Childhood Friends are finding themselves the center of attention of something old, dangerous and evil living in the woods... something that knows your name.

The sequel, It Lives Beneath, released October 2018-January 2019, follows the story of a college student currently on vacation, Harper Vance (you can choose your gender and first name but your surname is fixed). One uneventful day, you and your half-brother Elliot Vance return home only to discover a shocking tragedy. Later that summer, you and Elliot move in with your estranged, controlling and strict grandfather Arthur in Pine Springs. You quickly begin to make friends, but despite the beautiful tranquil of this town, you quickly learn that there is something sinister living beneath the local lake.

open/close all folders
Tropes applying to both books
It Lives in the Woods
It Lives Beneath
Advertisement:

Alternative Title(s): It Lives In The Woods