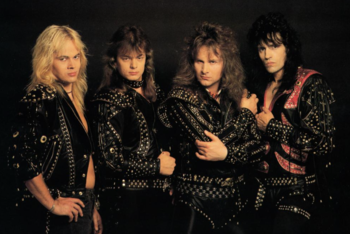 The band during the Death or Glory era.note From left to right: Iain Finlay (drums), Jens Becker (bass), "Rock 'n'" Rolf Kasparek (guitar, vocals), Michael "Majk Moti" Kupper (guitar)
We are prisoners of our time
But we are still alive
Fight for the freedom, fight for the right
We are Running Wild
— "Prisoners of Our Time"
Advertisement:

Running Wild is a Speed/Heavy/Power Metal band from Germany and are considered to be the inventors of Pirate Metal. Originally formed in 1976 as Granite Hearts, they soon changed their name to Running Wild as an homage the Judas Priest song of the same title. The band's early work featured lyrics and imagery centered around satanism and Dark Fantasy, but with the release of the band's third album, Under Jolly Roger, frontman "Rock 'n'" Rolf Kasparek decided to creatively change course with the band's theme, and so Pirates would define Running Wild from then on.

Although Running Wild is mainly known for their pirate theme, they're not as gimmicky as you'd think. The topics of their songs range from ancient conspiracies, literature, Heavy Meta, and political and environmental issues to history in general.