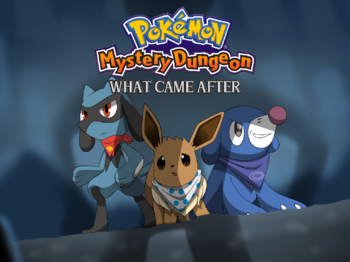 "Their adventures would be plentiful, and their friendship would be everlasting."

Pokémon Mystery Dungeon: What Came After

is an in-progress Pokémon Mystery Dungeon fanfiction by C. Pariah

, started on December 3, 2018. It follows a human girl called Alesia who wakes up in a dark cave as an Eevee and is discovered by a Riolu and a Popplio, who invite her to stay with them as part of their R.E.E.D. (Rescue, Exploration, Enforcement, Delivery) team dubbed Team Everlasting, kicking off many adventures on the Ice Continent, during which Alesia hopes to discover how she ended up here.