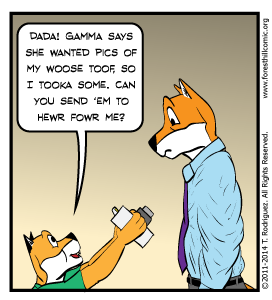 Hunter takes things literally.
"... I was naive, Benni, just like you are right now. I didn't realize the danger I put myself into, nor did I understand the consequences of what I was doing, but that's a part of being young and growing up."
— Flora
Advertisement:

Started in January 2012, Forest Hill is a Slice of Life Dramedy written and drawn by Tim Rodriguez that follows the lives of three friends and their families as they deal with growing up, as well as a school bully who has been raised in less-than-ideal circumstances.

The cast includes Tanya, a spoiled fox who has her dad wrapped around her finger, Kaleb, a rabbit whose mother is struggling to get by, and Munch, a cat who pays more attention to the T.V. than anything else.

Plot arcs have included moving to the eponymous city, fitting in at school, a hospital stay, a sleepover, and the rescue of a bully from his abusive father, which leads to the uncovering of a child prostitution ring. It gets worse.

Most of the strips are in short-form Newspaper Comic format, with early strips in black and white or grayscale, and later strips in full color, although recent strips have switched back to black and white. Occasionally, a half-page Sunday Strip would be posted as well to keep with its newspaper feel.

The comic is notable for currently being one of the only comics to have a positive review on the Bad Web Comics Wiki.

The comic is hosted here