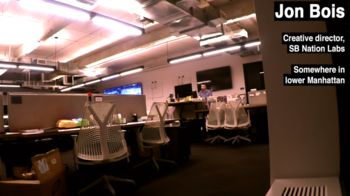 Jon in his natural habitat, discovering a terrible secret.

's Creative Labs & Secret Base, and the creator of some of the weirdest things you've ever seen on their website.

Though he first made his name as one of the writers on the Progressive Boink websitenote unfortunately, much of it has been lost to time, Bois started his ascent into one of SBNation's most prominent creators with SupperJumpin'

, an attempt to make the saddest professional sport in the world. He also did some retrospective writing on his previous job working for the Radioshack Company to discuss why it deserved its ultimate fate. He then turned to the world of video games with NBA Y2K

, where he bent the world of the NBA 2K and Madden NFL games in all sorts of different ways, creating several fan-favorite characters (such as the rotund but sweet Clarence BEEFTANK) and memes throughout.

Then, he made one of his most impressive works of fiction and surrealism to date: The Tim Tebow CFL Chronicles, detailing ex-NFL player Tim Tebow's trek through the Canadian Football League.

He has also made many videos for both SB Nation

's and his own

YouTube channels, with his most notable series being Pretty Good, a show about stories that are...well...pretty good (even if they have nothing to do with sports), and Chart Party, where he'd make visualizations of odd and sometimes interesting statistics regarding certain athletes or sports.

People here likely know him for his multimedia story 17776, where the world only has ridiculously long games of American Football to think about anymore.

After a brief hiatus, it was revealed Jon was working on a 5 part documentary with Felix Biederman called Fighting in the Age of Loneliness, about the history of MMA. His most recent projects for SB Nation include two comprehensive multi-part history series with fellow video producer Alex Rubenstein about hardscrabble major league sports franchises: 2020's The History of the Seattle Mariners and 2021's The History of the Atlanta Falcons.

Most of his work is now placed in his own blog on SB Nation, called A Huge Dog

, which is SB Nation's YouTube channel, features both Bois' video content and other sports history videos that have similar humorous but well-researched style.

Works by Jon Bois with their own page: