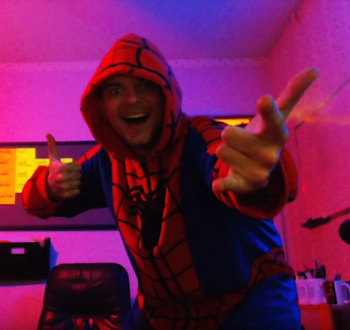 Gary Busey!
"Being Canadian filmmakers, you may have a moose appear unexpectedly in your shot. This phenomenon is what's known as Moose In Scene. Or mise en scene in le frances. Majestic as these creatures may be, time is money. And it is recommended that you kill any animals interfering with your shot on sight."
-Film And You: A Filmmaking Instructional Video

, better known by his online name Jon CJG, formerly known as DigitalPh33r (something he'd like you to forget about) is a Canadian director, writer, actor and composer who specializes in Machinima.

Jon is probably the second most popular guy to dabble in Halo Machinima right behind Rooster Teeth, with whom he's had a past Fandom Rivalry before he collaborated with them on some Rooster Teeth Shorts. He's otherwise best known for Arby 'n' the Chief, which ironically is primarily puppeteering toys as opposed to recorded video game footage. He's also made other shows, such as Deus ex Machina, Hard Justice, One Life Remaining and It's a Wonderful Live. All of which are currently categorized under Old Shame in his mind, as he's refused to acknowledge their existence.

He also wants us to #FixTheWorld