Web Original / The Death of Basketball 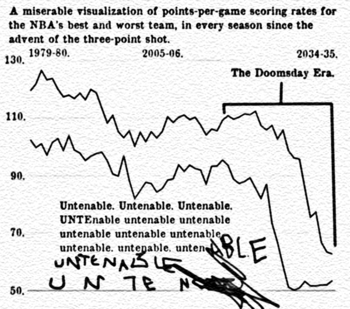 All is lost.
Advertisement:

The Death of Basketball is a short story written by Jon Bois about the National Basketball Association, based on events simulated in NBA 2K14.

The NBA has been around for over half a century, and it seems like it will continue for a long time. But how exactly will it end? What if the players of a sport known for its spectacle got progressively worse? What if the sport was robbed of its spirit thanks to the loss of talent?

This is how the NBA people love was destroyed.

, while two companion videos, THE DEATH OF BASKETBALL

and THIS IS THE END

In 2019, the idea was expanded in the first video of a new series called Fumble Dimension

, this time done in NBA 2K19 and with the assistance of SB Nation's own Kofie Yeboah. This gave more of a story to the idea by creating an army of clones of one absolutely terrible man, Stupid Crap Face, slowly killing the game by infecting the league with him over and over and over again, and watching the games' good players valiantly fight to keep it relevant. The series later expanded to other sports, such as football, baseball, soccer, and golf.

The Death of Basketball contains examples of: