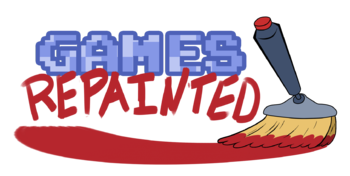 We paint games, I think!

"Among all the gaming franchises across all of history, there's probably none that are actually any good."
— Narrator, Sonic Adventure DX Repainted

is a YouTube and Twitch channel that plays through various video games. However, there's a catch; the game's textures are dumped using the Dolphin emulator, edited, and stuck back in. The edits can range anywhere from dumb memes to original artwork. This makes classic games look like a beautiful trainwreck.

Games Repainted is hosted by a group formerly known as TheFappingGuys, although some repaints have been hosted by Dat Stream, GeePM, and Vinesauce. While Repaints are usually held in private, some games have their textures released to the public to edit. The first public Games Repainted was Paper Mario: The Thousand-Year Door.