Video Game / Spirit of the North 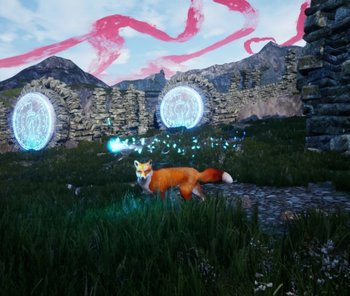 Spirit of the North is a 2019 adventure video game created by Infuse Studio for PlayStation 4, Xbox One, PC, and Nintendo Switch.

In this game that lacks dialogue or a conventional narrative, the player takes on the role of a (non-anthropomorphic) fox journeying through landscapes inspired by Iceland. The fox is occasionally accompanied by the translucent guardian of the Northern Lights, which also takes on the shape of a fox. The two travel through the remains of a lost civilization, putting lost souls to rest and ridding the world of a corrupting force that threatens to overwhelm everything.

Compare with Lost Ember, also featuring a canine guided through the ruins of a lost civilization by a point of light, except that one also includes possessing various animals to use their abilities and dialogue.