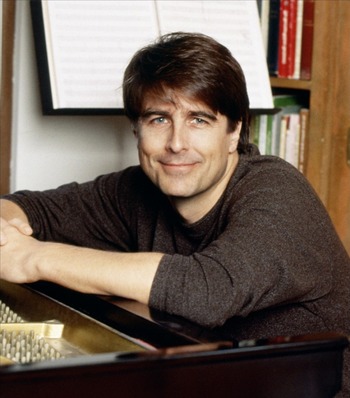 Thomas Montgomery Newman (born October 20, 1955) is an American composer and conductor. The son of the very prolific Alfred Newman and the Mississippi-born Martha Louise Montgomery, he attended the University of Southern California and then went on to receive a master’s degree in music at Yale University.

A classical training, inspired by Newman's desire to master the piano and violin, led to an informal Hollywood apprenticeship in the early 1980's due his family ties with his uncle Lionel Newman, who was head of music at [1] during Thomas' high school and college years. The apprentice had previously watched John Williams conduct and record several major scores, including The Towering Inferno and The Poseidon Adventure in the early 1970's. Through that connection, Newman was responsible for orchestrating Darth Vader's death scene cue for Returnofthe Jedi in 1983, although Newman claims that Williams' composition was so complete that his own influence on the task was minimal.

Newman spent time writing for off-Broadway productions, theatre, and pop bands such as "The Innocents" and "Tokyo 77." He was mentored by Broadway great Stephen Sondheim and backed into a film scoring career when producer Scott Rudin hired him as a musical assistant on the 1984 teen-angst drama Reckless. He wound up scoring the movie, the first of a batch of hip and popular films to boast Newman scores, including Revenge of the Nerds the same year, Desperately Seeking Susan in 1985, and The Lost Boys in 1987.

His breakthrough came in 1995 when he earned 2 Academy Award nominations in film scoring, Little Women (1994) and The Shawshank Redemption (1994). He was the only double nominee that year. Some of his notable film scoring includes, American Beauty (1999), Pay It Forward (2000), Erin Brockovich (2000), Road to Perdition (2002), Finding Nemo (2003) and WALL•E (2008). 2015 marked his first collaboration with Steven Spielberg, with Newman composing the score for his Cold War thriller Bridge of Spies.

Newman tents to favor minimalist composition, relying heavily on leitmotif and simple chord progressions. He likes to vary the instrumentation in his scores, ranging from full orchestra to percussion-only music. He is also fond of incorporating unusual instruments such as the zither, hurdy-gurdy, psaltery and hammered dulcimer, or unexpected sounds, like Aboriginal chants and the chirping of cicadas. The composer declared that he has "an interest in mundane experimentation."

Newman has received 14 Academy Award nominations but has yet to receive an Oscar. He is the most nominated living composer never to have won an Academy Award (the late Alex North also had 14 nominations without a win); however, Thomas has won 5 Grammy Awards (one for American Beauty and two each for WALL•E and the theme from Six Feet Undernote  for Instrumental Composition and Instrumental Arrangement), two BAFTAs (for American Beauty and Skyfall) and an Emmy for Six Feet Under.

He, his father Alfred, his brother David, and his cousin Randy have their own page dedicated to their exquisite music, as well as a Pixar page.

Works he has scored with pages on this wiki: