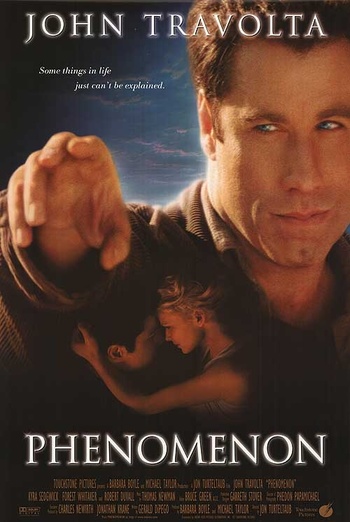 Phenomenon is a 1996 film, combining elements of drama, romance, and fantasy. It was directed by Jon Turteltaub and stars John Travolta, Kyra Sedgwick, Forest Whitaker, and Robert Duvall.

Its opening is not too different from a Super Hero Origin. George Malley (Travolta) is your average joe, an auto mechanic in a small city. On the evening of his 37th birthday, everything changes. He notices a strange flash of light which somehow grants him a genius-level intellect and telekinesis.

Having an altruistic streak, George decides to devote his new skills to the improvement of his small town. Initially the locals are amused and intrigued. But their amusement soon turns to fear, and draws the attention of the FBI.