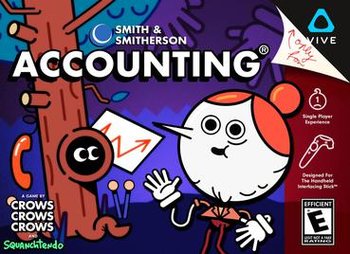 In it, you play... yourself, a new employee of the Smith & Smitherson accounting firm. After being yelled at by two gentlemen over the phone, you put on a VR headset and attempt to do some VR accounting. Things go rapidly downhill from there. You end up in a scenic forest rather than the accounting world you were supposed to be in. The tranquility is shattered by a very vulgar and very angry tree ghost... thing. He keeps swearing at you for no apparent reason other than "THIS IS MY PLACE". Then the guys call you on a random phone and... Well, if you've ever tried to listen to someone in real life and someone on the phone at the same time, you know how this goes.

From there, it gets weirder, bloodier, and even more insane.

Did we mention that Justin Roiland worked on this?

It later received an Updated Re-release for PlayStation 4, named Accounting+.

In severe need of Wiki Magic love. And some bleach for our eyeballs.