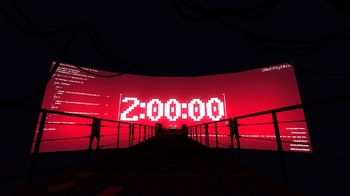 ...I want to watch you for every moment that you're powerless, to see you made HUMBLE.

Beneath its comedic exterior, The Stanley Parable is a tale of Existential Horror, rife with both Nightmare Fuel and Paranoia Fuel with its surprisingly excellent use of Nothing Is Scarier and Controllable Helplessness.