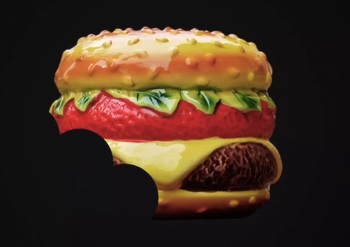 EAT: THE REVOLUTION is a Surprise Creepy eating-Simulation Game developed in 2017 by developer Crows Crows Crows.

The basic gist of the game is that the app will present food items, and you click on them to eat them. As you eat, the game will also give you messages in between meals. It seems simplistic enough, but the more you open and close the app, the more the food and messages will change- revealing some surprisingly creepy meals and sayings as you progress. There's no music, but there's a dark ambiance that plays the entire time, along with loud biting sounds and typing noises.

Despite the odd premise and gameplay, there is something like a story: The text encourages the player to keep eating, kill "Uncle Hunger", and join your comrades in a country full of food, away from evil capitalism and starvation.

The app is available for free download on the Google Play store as well as the Apple store.