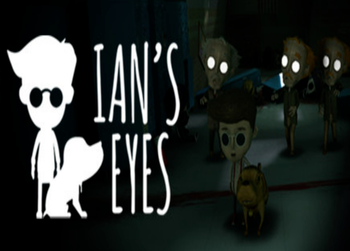 Ian's Eyes is a Survival Horror game by Sindie Games.

Ian is a young boy who recently transferred to Blue Norholm Primary School in Wintreal. As such, he's essentially the new kid in a new place. For many of us, this is always a problem, but it's especially so for Ian. How so?

But luckily, Ian isn't alone. With him is his trusty seeing-eye dog North, whom, in an interesting twist, is the Player Character.

Ian and North have come to Blue Norholm Primary school on the day of its Centinary, which is being celebrated with the unearthing of a time capsule which contains, among other things, a slideshow. However, something happens, as upon viewing the slideshow, most of the students and faculty are somehow turned into a horde of bloodthirsty zombies. Ian, being blind, is one of the few being unaffected by the slideshow, and lucky him, neither is North. Also, it seems that the principal is unaffected as well.

So, now North has to guide Ian through the zombie-infested school to find a way to get out safely.